Psychologists on the March: Science, Practice, and Professional Identity in America 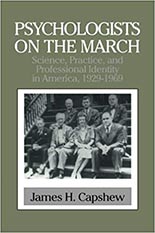 Psychologists on the March argues that the Second World War had a profound impact on the modern psychological profession in America. Before the war, psychology was viewed largely as an academic discipline, drawing its ideology and personnel from the laboratory. Following the war, it was increasingly seen as a source of theory and practice to deal with mental health issues. With the support of the federal government, the field entered a prolonged period of exponential growth that saw major changes in the institutional structure of the field that spread to include the epistemological foundations of psychology. This book is the first sustained study of this important era in American psychology. Moving back and forth between collective and individual levels of analysis, it weaves together the internal politics and demography of psychology in relation to the cultural environment. It is based on extensive archival research and includes extended discussions of the wartime reformation of the American Psychological Association, the role of gender politics, the rise of reflexivity, and the popularization of psychology, among other topics.

Psychologists on the March: Science, Practice, and Professional Identity in America, (1999)