Evidence and Interpretation in Studies on Early Science and Medicine: Essays in Honor of John E. Murdoch 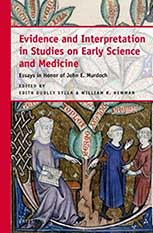 The studies in this volume present early science in its rich and divergent complexity. Many historians of the Scientific Revolution have used early modern scholasticism to represent pre-seventeenth century science as a whole, but a close look at ancient, medieval, and even early modern scientific writers shows that before the Scientific Revolution - and not only in Europe - there were many and diverse traditions of interpreting the natural world.