H.G. Bronn, Ernst Haeckel, and the Origins of German Darwinism: A Study in Translation and Transformation 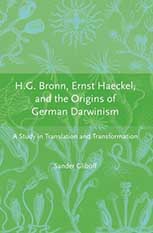 The German translation of Darwin's The Origin of Species appeared in 1860, just months after the original, thanks to Heinrich Georg Bronn, a distinguished German paleontologist whose work in some ways paralleled Darwin's. Bronn's version of the book (with his own notes and commentary appended) did much to determine how Darwin's theory was understood and applied by German biologists, for the translation process involved more than the mere substitution of German words for English.